Glittering with light, simmering with passion, and haunted by memories, Paul Clipson’s films are enigmatic. Like prisms they can be studied from a number of angles without becoming transparent. Like ephemerality they may be ungraspable in their totality. Accordingly, they tempt me to only discuss them in terms of formal particularities. It would even be foolhardy to ignore Clipson’s singular rhythmic tendencies and his constant collaboration with musicians. It would be equally remiss to ignore his stunning play with light. Nevertheless, the films in Landscape Dissolves contain a gestalt that organizes and even enables these parts to create a coherent body of work. Simply put, Landscape Dissolves demonstrates a mode of perception wherein subjective mental states merge with physical experience. Each of his films investigates, enriches, and iterates this study. To understand Clipson’s simultaneously multi-dimensional and focused body of work we must first orient him around those who have tread similar waters. Filmmakers Stan Brakhage and Nathaniel Dorsky have both written about their artistic practices, and their writings will build a foundation from which to consider Clipson’s oeuvre. Formal analysis of his films themselves will demonstrate the ways in which Clipson’s work aligns with sentiments expressed by Dorsky and Brakhage and how it deviates. Finally, and in conclusion, some words from Alain Badiou will emphasize the value of a filmmaker like Clipson.
When considered in terms of experimental cinema’s relatively brief history, Clipson’s phenomenological play can be related most recognizably to the writings of Stan Brahkage and Nathaniel Dorsky. Brakhage’s expansion of the idea of camera-as-eye is vital for understanding Clipson’s work. In Metaphors on Vision, Brakhage ascribes the camera with the potential to approximate the original perception of childhood. An innocent gaze[1]. The camera’s images, especially as they are projected and received by a retina, cannot be literal documentations of some reality, but they can start to suggest an almost sacred kind of perception. Thus even in the most biological, and thereby physical, analogy for the camera, psychological states are present. Congruently, Nathaniel Dorsky writes, “when cinema can make the internalized medieval and externalized Renaissance ways of seeing unite and transcend themselves, it can achieve a transcendental balance.”[2] Dorsky thereby explicitly states that when the psychological meets the physical we reach a kind of new knowledge. Clipson’s works are not simply modernizations of Brakhage or formal variants on Dorksy, but in order to suss out the way Clipson’s work deepens these perspective we must turn to the films themselves. 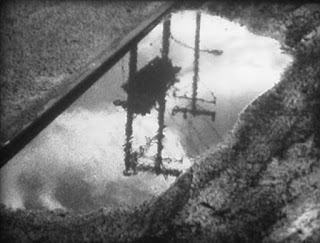 Play between interior and exterior is the crux of Clipson’s films. Each film is an iteration of this theme, an experiment in perception, but Absteigend illustrates this unifying gestalt in its structure and is therefore a good place to begin study. Absteigend could be seen as a simple study of urban architecture and its lights, darks, lines, and movements. And the first half of the film appears as such. High-contrast shots of urban abstraction are dense with grain. Trains roll by like modernist caterpillars. However, about half way through the film Clipson presents us with the reflection of this imagery in the water of some mud puddles. The angle and height of the camera suggests a human perspective, and the inverted and distorted imagery is a perfect metaphor for the inverted and imperfect images received by the human retina. After this moment we are treated to superimpositions and densely layered imagery. Before the images crawled, now they dance. We also see human figures for the first time. Brute physicality is put into motion by human experience and consciousness. A city becomes a symphony. In Absteigend the message is clear, perception animates the inanimate. 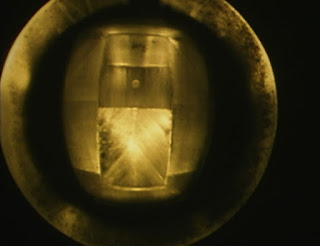 While Absteigend emphasizes a rift between the physical world its subjective counterpart, Chorus dissolves tension between these worlds into harmony. In the beginning of Chorus we fade through a mixture of spiritual, scientific, and organic visual metaphors for the eye. Church windows diffuse soft red light. The moon on a cloudy night fades into a circular fluorescent bulb. The visual effect of a rack focus even causes this light to appear as a human eye for a few moments. Puddles of water refract shimmering gold orbs. This combination of signifiers for vision or its augmentation speaks to the combination of inner/outer perception Dorsky references and is the kind of high knowledge Brakhage talks about in Metaphors on Vision. Religion and spirituality are a way in which we filter the refractions of an elusive physical world. Technology and industry are not barriers to this world so much as another refraction or augmentation of it. Chorus elucidates this experience of the world through the lens of civilization and religion, but the phenomenon apprehended remains concrete, powerful, and undeniable. 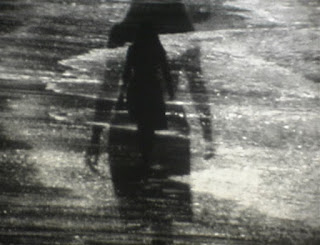 Origin inserts cogent thought directly into material experience. Human construed time converses with pure duration. Images of a woman walking away from the camera replay obsessively as in a memory of a lost love or family member. The actual world interjects in and merges with this Proustian memory through the rhythmic, constant, and reliable crashing of waves on a beach and the molecular ripples of the water. The soft droning of the music follows neither the woman nor the water and it serves rather to connect them in their different yet equated representations of time. The rhythms of subjective time and material time flow in and out of each other in tidal fashion.

Thusly, Paul Clipson does not have one view of the way vision or experience operates, which perhaps, is why we have no written manifesto from him. Instead we have collaborations and experiments. Every film in Landscape Dissolves is set to a soundtrack produced independently from the film. The music is not a score or accompaniment but another phenomenological layer. Clipson would screen his films with live musical performances without manipulating either element beforehand to suit the other. True conversation. Clipson plays in the perceptive world noted by Brakhage and Dorsky. He gives us ideas and experiences to reflect upon. Film philosopher Alain Badiou writes that there “is no real opposition between constructed time and pure duration since it can install one within the other, something that is always done by the great filmmakers, really only the greatest ones.”[3] Each one of Clipson’s films show a new relationship between discontinuity, or interiority, and exteriority or continuity, and in this way Clipson’s films as a whole show a deeper knowledge of time and perception than any single manifesto or roll of celluloid could. In this way they are crystalline but never opaque, eclectic yet focused, brilliant and enigmatic.
-Collin Kluchman
[1] Brakhage, Stan. Stan Brakhage: Metaphors on Vision. (Light Industr.
2] Dorsky, Nathaniel. Devotional Cinema. (Berkeley, CA: Tuumba, 2005), 27.
3] Badiou, Alain, Antoine De. Baecque, and Susan Spitzer. Cinema. (Cambridge: Polity, 2013), 219. 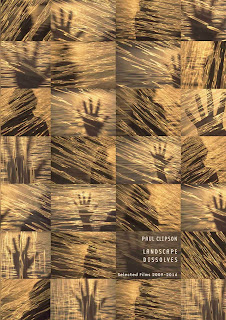 Released in collaboration with Students of Decay records : https://studentsofdecay.com/