Re:Voir is proud to announce the first DVD edition of the complete works of Adolpho Arrietta, to be released November 3rd. 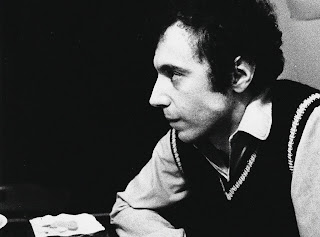 From his early short films shot in Madrid in the 1960s, his first features made in Paris in the 1970s, his critically acclaimed Flammes (re-released in Paris this Spring by Capricci), his later, more ambitious yet rarely seen features of the 1980s Grenouilles and Merlin, to his recent personal essays shot in digital, the work of Adolpho Arrietta spans a multitude of styles and themes, yet offers a singular grace, a poetic sensibility and a refreshingly keen eye for composition, rhythm and character study.

The boxset includes five DVDs with booklets, critical texts and new introductions to the films, with subtitles in English, French and Spanish. All of Arrietta's thirteen completed films from 1965 to 2008 are included in their most recent director's cut, and remastered from the best available sources.

We are offering the boxset now at an advance-sale subscription rate of 49 euros, available only direct from the publisher. After the release date, the box will be available throughout our distribution network for a list price of 64 euros. The individual DVDs are also available now at a subscription rate of 15,90 instead of 19,90.

Your support will help us complete production of this ambitious boxset. You can order at this link.

Critical acclaim for the films of Adolpho Arrietta:

"A young Spaniard outside of every system, of every clique, of every influence, records on 16mm (since cinema for him cannot be just a profession) the quiet heartbreaking delusions that express, better than if he had prepared indictments, the state of mind of a generation for whom poetry today is the only refuge and the only feasible fight..." Jean-André Fieschi, Cahiers du Cinéma, 1964

"Arrietta's film is compelling, informative, entertaining and beautiful. Its subject is the Paris transvestite scene and it's depicted with the flair of Jack Smith, the directness of Andy Warhol, and the special tenderness of Arrietta. I salute the Poet." Jonas Mekas, Movie Journal

"Tam Tam shows desire and repression through the subversion of archetypes both social (ambassadors, stars, artists) and sexual (homophiles, transvestites, transsexuals), and converting these into a most accurate account of a certain kind of unease: an identity crisis. [...] Arrietta proposes a dazzling vision of these micro-universes as seen from within, from the very place of their oppression: an admirable example of cinéma-vérité confirmed by the tireless search for new levels of expression." Raphaël Bassan, Cinéma Différent

"Chaotic, underground, fleeing the standards of commercial cinema, the centerpiece of Arrietta's lifework is a film of a more classical nature than his others, Flammes, and it is also his masterpiece. Flammes occupies a place in his work comparable to Chelsea Girls for Andy Warhol: they would have been crown jewels in the history of classical cinema if only the names of their creators were not so radically associated with the fringe movements." Isabelle Regnier, Le Monde

"Adolpho Arrietta, this Spanish Cocteau living in exile in the '70s Parisian underground, this film poet of transvestites from the world of Marguerite Duras, knew all too well that 'living out your fantasy' means nothing, especially in the cinema, supposedly the art form of fantasy itself. Being trapped inside a house of many doors that a stream of visiting characters spend their time opening, closing and knocking on, whether they are answered or not, allows this film to better evoke the possibility of an outside world." Luc Chessel, Les Inrockuptibles

"Vacanza permanente is without a doubt Arrietta's roughest film: the effort he is making can be felt, but it is just this effort that is so moving when one knows the rest of his work. We are in his laboratory, watching him look for grace in the most ordinary objects, for possibilities in a few faces and gestures, for fragments of fiction in certain juxtapositions of scenes, for ghosts on a TV screen: 'Delight me,' the filmmaker seems to murmur to everything he films." Marcos Uzal, Vertigo #39